Catoctin Veterinary Clinic is dedicated to providing Leesburg the highest quality veterinary care, with compassion for both pet and pet owner. We take pride in our staff, services, and facility.


Visit us and you’ll be confident your pet is in trustworthy hands. 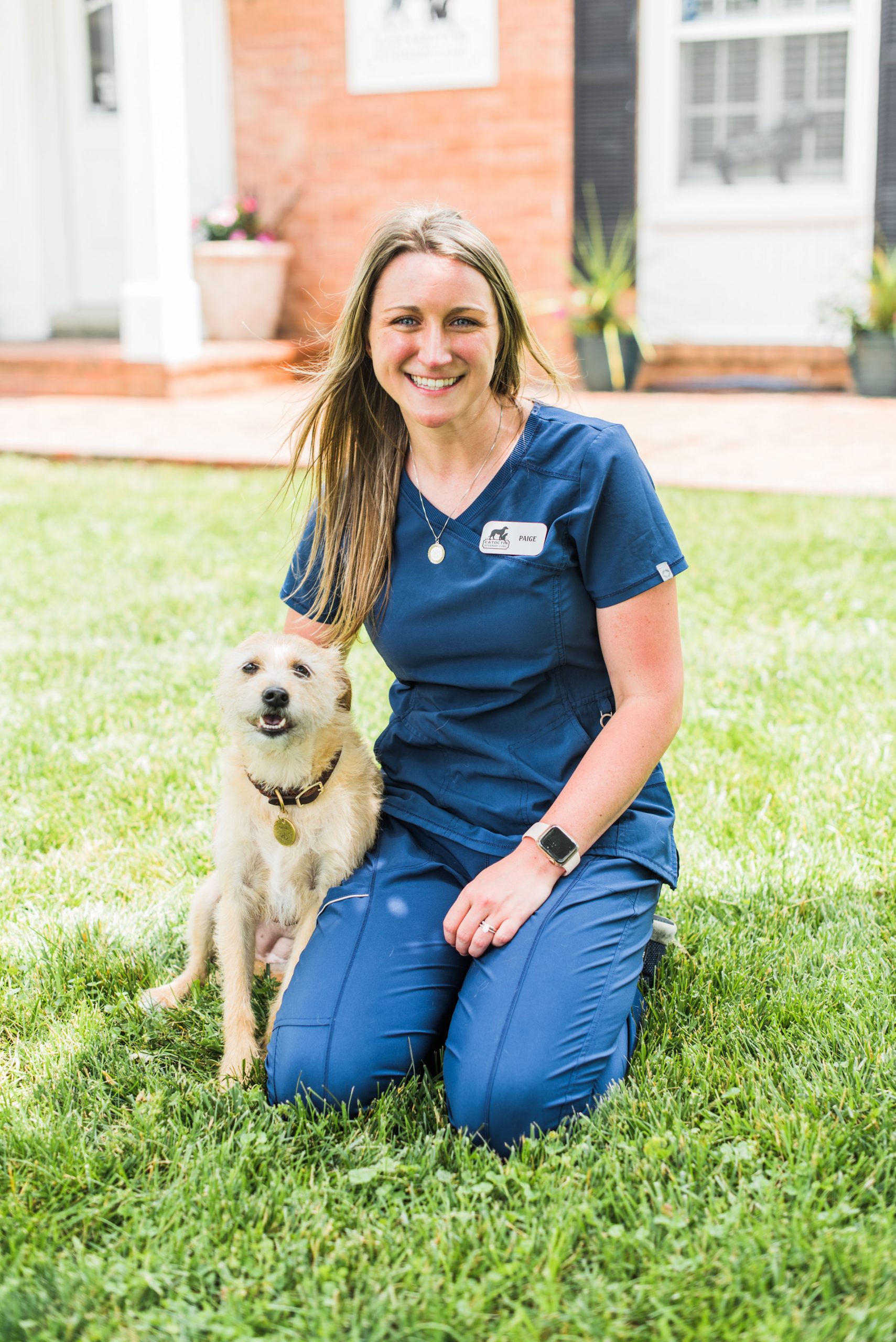 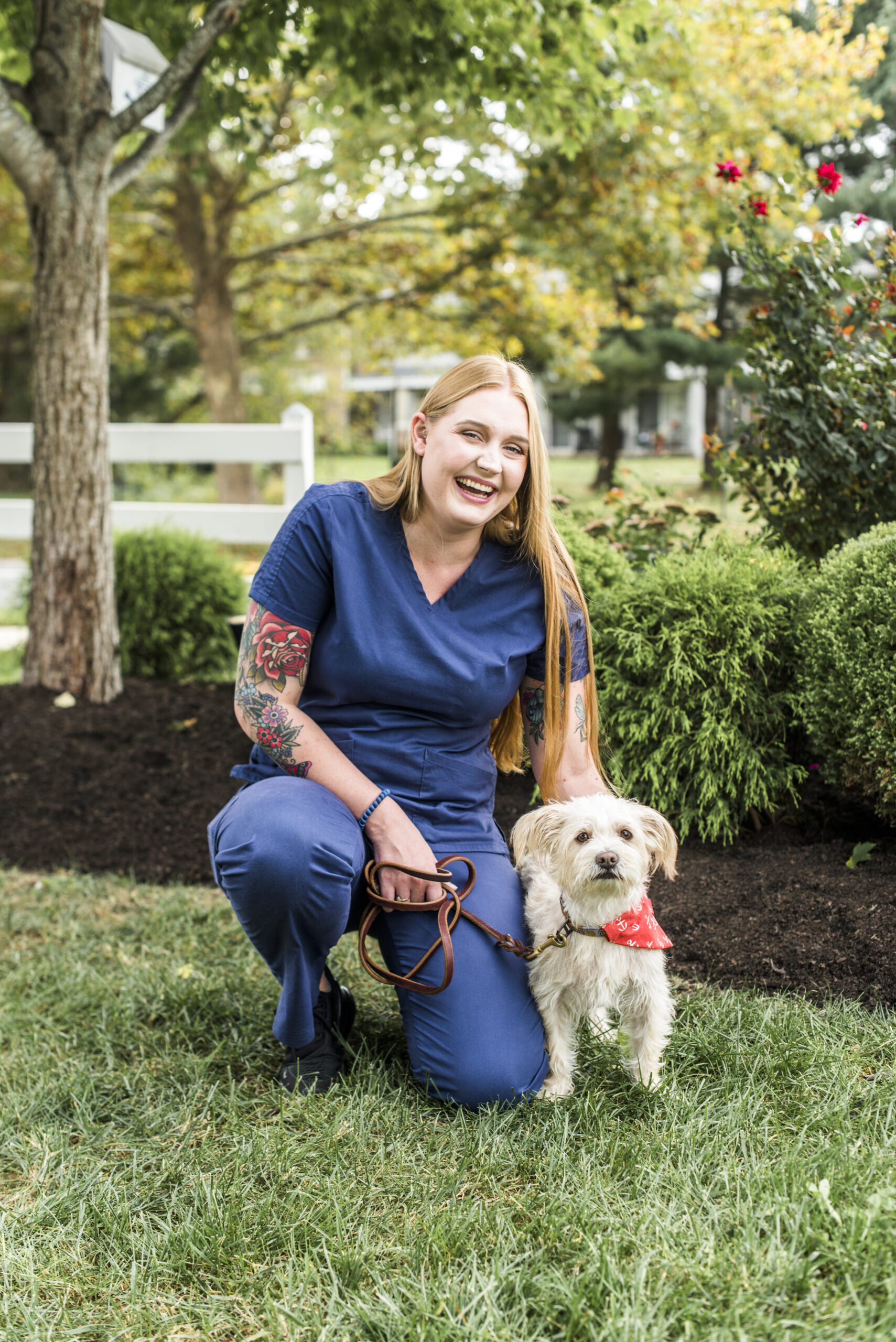 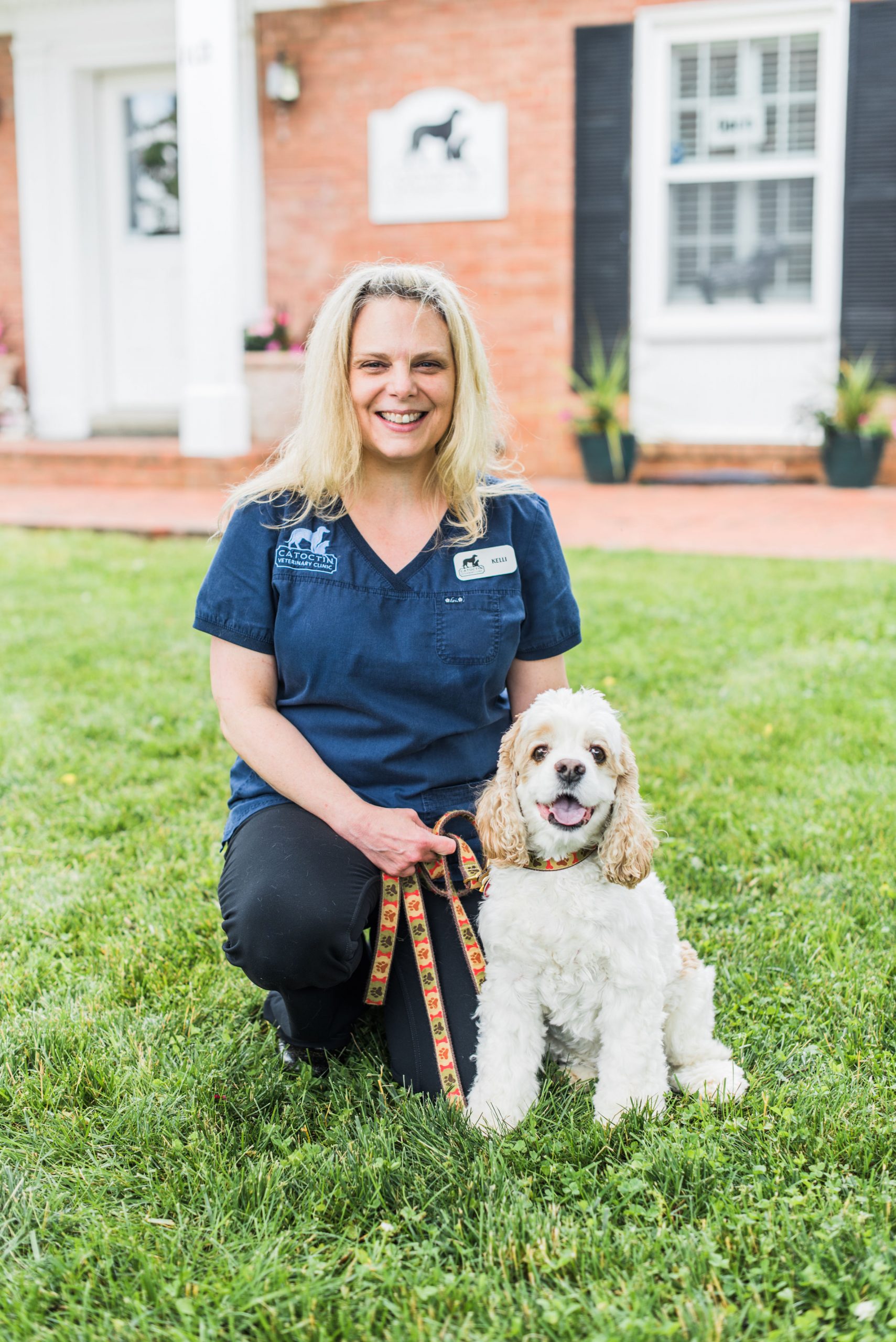 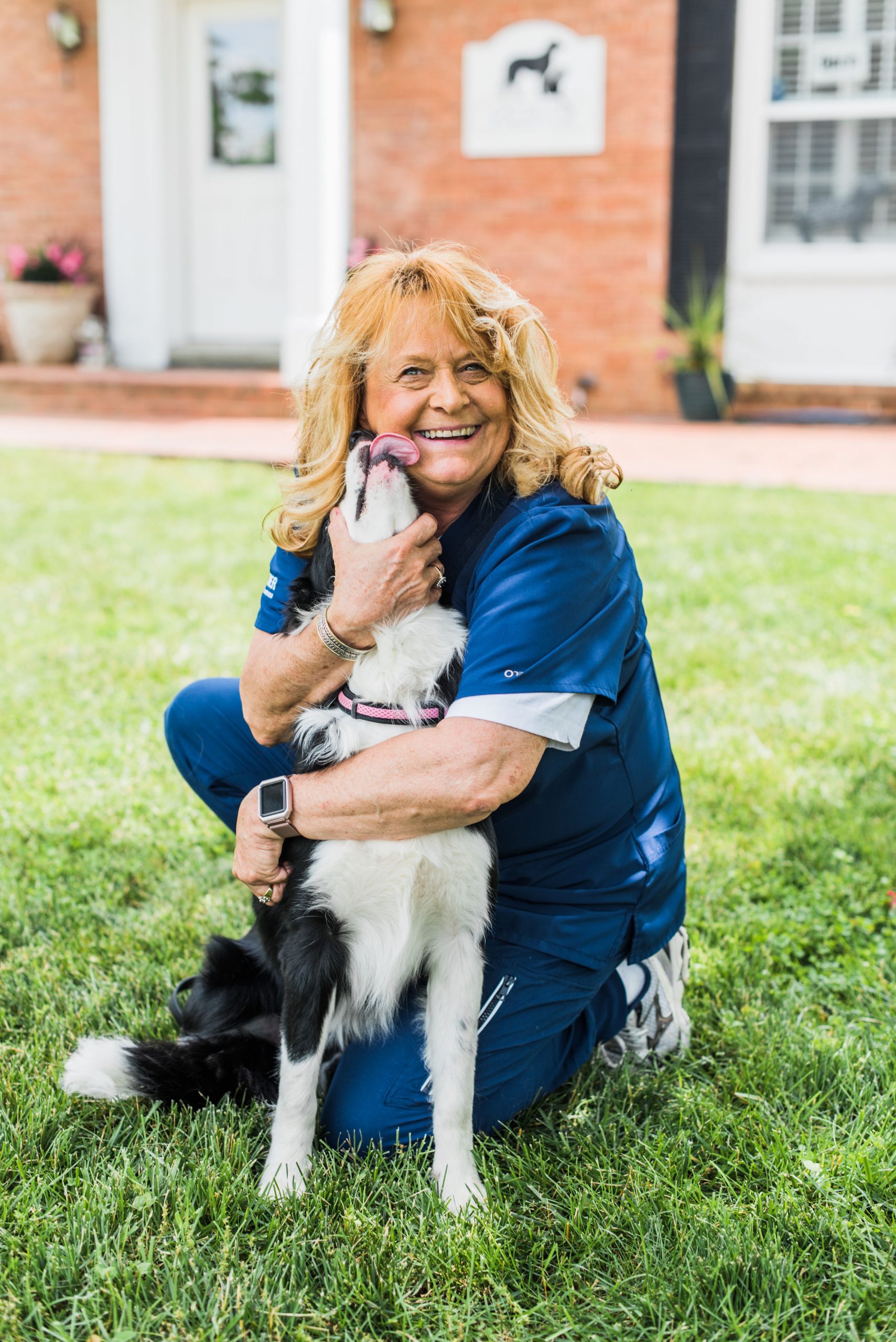 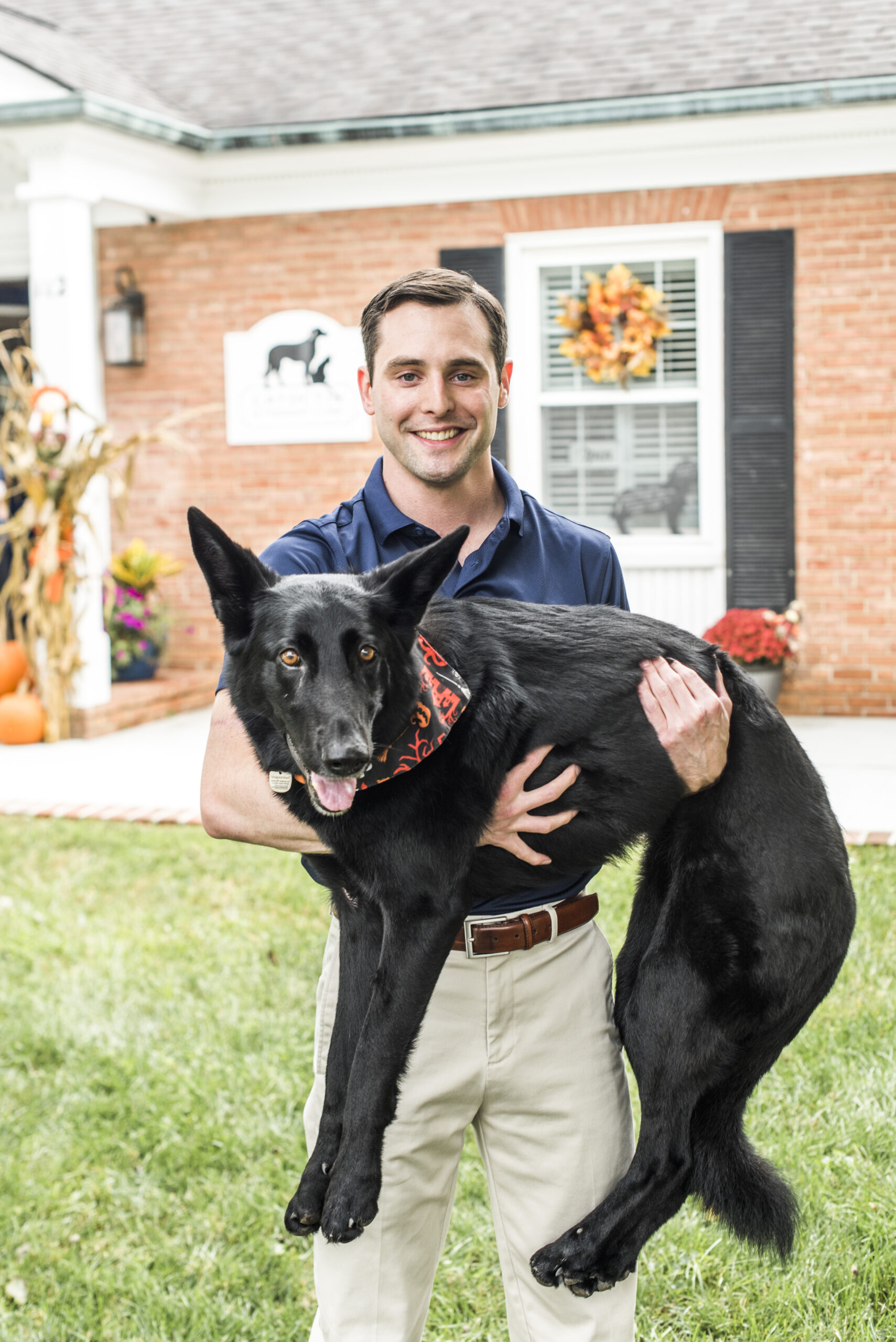 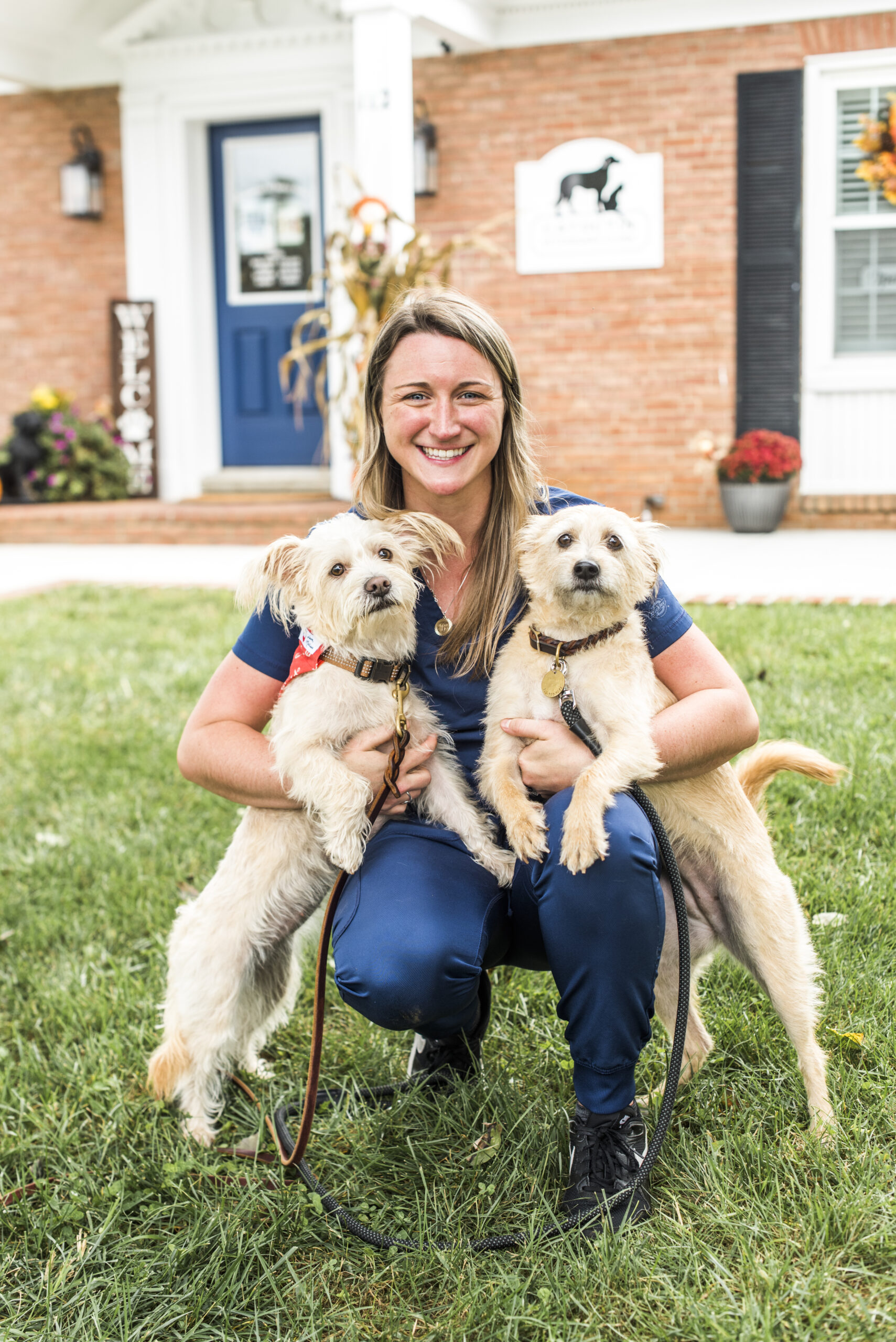 Paige is a native of Loudoun County. She grew up in Leesburg and even went to Loudoun County High School, right down the road from the clinic. Paige graduated from High Point University in 2014 where she achieved her Bachelors degree in Business Administration. She began her career at Catoctin Veterinary Clinic as a veterinary assistant in 2017, she was named Office Manager in 2020 and became the Hospital Manager in 2022.

Paige has always had a passion for animals. Growing up she had just about every animal a little girl could want from horses to rats. Paige’s first rescue was a beagle named Mason who came from Lost Dog and Cat Rescue. She volunteers with Homeward Trail Animal Rescue and is an advocate for the Guanica Animal Rescue Project in Puerto Rico, which is where she adopted her adorable terrier mixes named Caddie and Birdie. Paige and her husband, Robert, are expecting the arrival of their first child, Quinn, in June of 2022. Robert is a Golf Professional at a club in the area and their family is very golf centric. Caddie and Birdie, their rescued terriers, are the little golf caddies they always needed in their lives and Palmer, their rescued cat, is named after their favorite professional golfer, Arnold Palmer.

In Paige’s free time she spends time with her new daughter, Quinn, and husband. She is a diehard Washington Nationals fan and loves the game of baseball. She even made it to the World Series game when they won in 2019. Whenever she can, she escapes to her beach house in Nags Heads, NC. 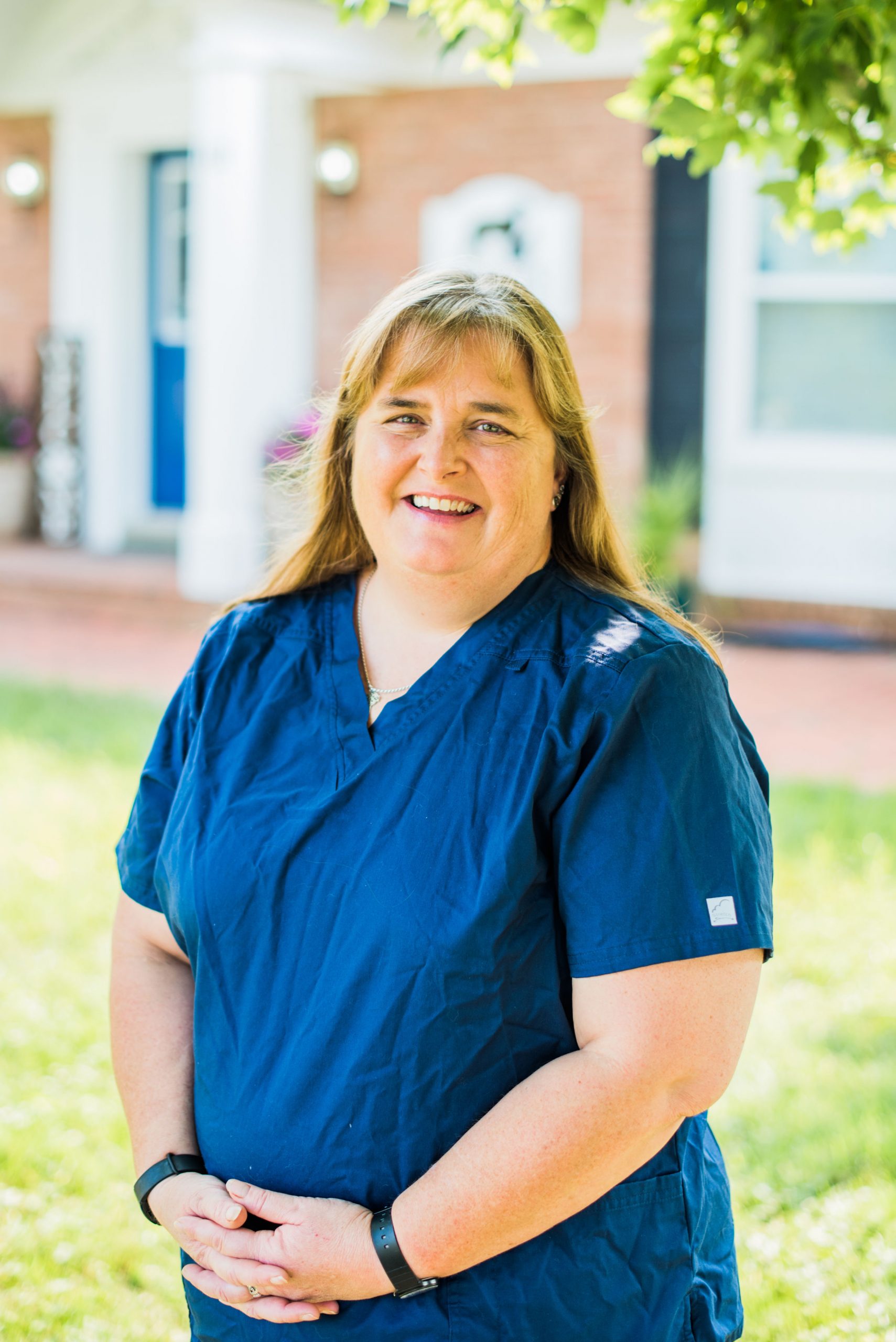 Amy became a Licensed Veterinary Technician in 1992. She started at Catoctin Veterinary Clinic in 2000 under Dr. Clinton Pease. In her 20 years of service at Catoctin she has been a driving force behind streamlining surgical processes, techniques and protocol. Today, she is the lead surgical technician. Many may not know Amy because she is always in the surgical suite rather than in appointment rooms meeting our clients face to face. Amy is a vital part of the operation and helps keep your pet happy, healthy and safe when undergoing any surgical procedure.

Amy has always had a corgi in her life. Currently she is the mother of Vinny Boombatts. Vinny and Amy compete in AKC agility trials all over the East Coast. Vinny has also gotten into scent work and lure coursing and is currently ranked as the 10th fastest Pembroke Welsh Corgi in AKC FCAT. He’s becoming quite the competitor! Amy also was the mother of Tony Two Toes. Tony got his name due to his front right foot only having two toes. We are sad to report that Amy said goodbye to Tony after 15 great years. He will always be near and dear to her heart.

In her free time, you can often find Amy at the beach visiting family, in the agility ring, or going to corgi gatherings. Amy is also a diehard Jimmy Buffett fan and has been to over 20 concerts thus far.

Kelli became a Licensed Veterinary Technician in 1992. She has been working at Catoctin Veterinary Clinic since 1989! She started with Dr. Pease and has been an integral part of Catoctin since the beginning. With over 30 years of experience there is nothing Kelli has not seen! She has become near and dear to almost every client’s heart. She treats every patient like she would her own. She has extensive experience with dogs and cats and always helps them feel comfortable in the exam room.

Kelli is married and the proud mother of two sons. She seems to have boundless energy keeping up with her sons and four-legged children. She has a cat named Rascal and a cocker spaniel named Barkleigh. Kelli has always loved cocker spaniels. She is definitely an expert on the breed. In her free time she enjoys reading, spending time with family, and catching up with friends.

Kasy has been at Catoctin Veterinary Clinic since 2017. She is extremely hardworking – working at Catoctin Vet, going to college, and working at her family’s restaurant every weekend. She is committed to veterinary medicine. Her goal is to become a Veterinarian someday. Kasy is currently enrolled at George Mason University and studying Biology. Being bilingual, Kasy has become essential to the clinic, offering the ability to communicate effectively for our doctors to some of our clients. Kasy would love to become a veterinarian without borders, going to other countries to help spay and neuter animals and give essential care to animals in need.


Kasy is the mother of two! She has an adorable human son named Theo and a four-legged lab mix named Hero. When she is not running around after her two boys, she loves to spend time with friends, watch movies, and take Hero to the dog park.

Kayla started at Catoctin Veterinary Clinic in 2014. She has been a valuable asset, bringing her previous knowledge as a veterinary assistant to the practice. Kayla started her career in animal medicine right after high school; giving her 10 years of experience in the business already. Kayla attended Blue Ridge CTC and achieved her associates degree in Applied Science. She worked in emergency animal medicine at Blue Ridge Veterinary Associates for six years before joining Catoctin Veterinary Clinic.

In Kayla’s free time she enjoys working on her newly purchased home, hiking, decorating, and spending time with her husband and friends. Kayla and her husband plan on welcoming a Staffordshire Terrier puppy into their lives this summer. 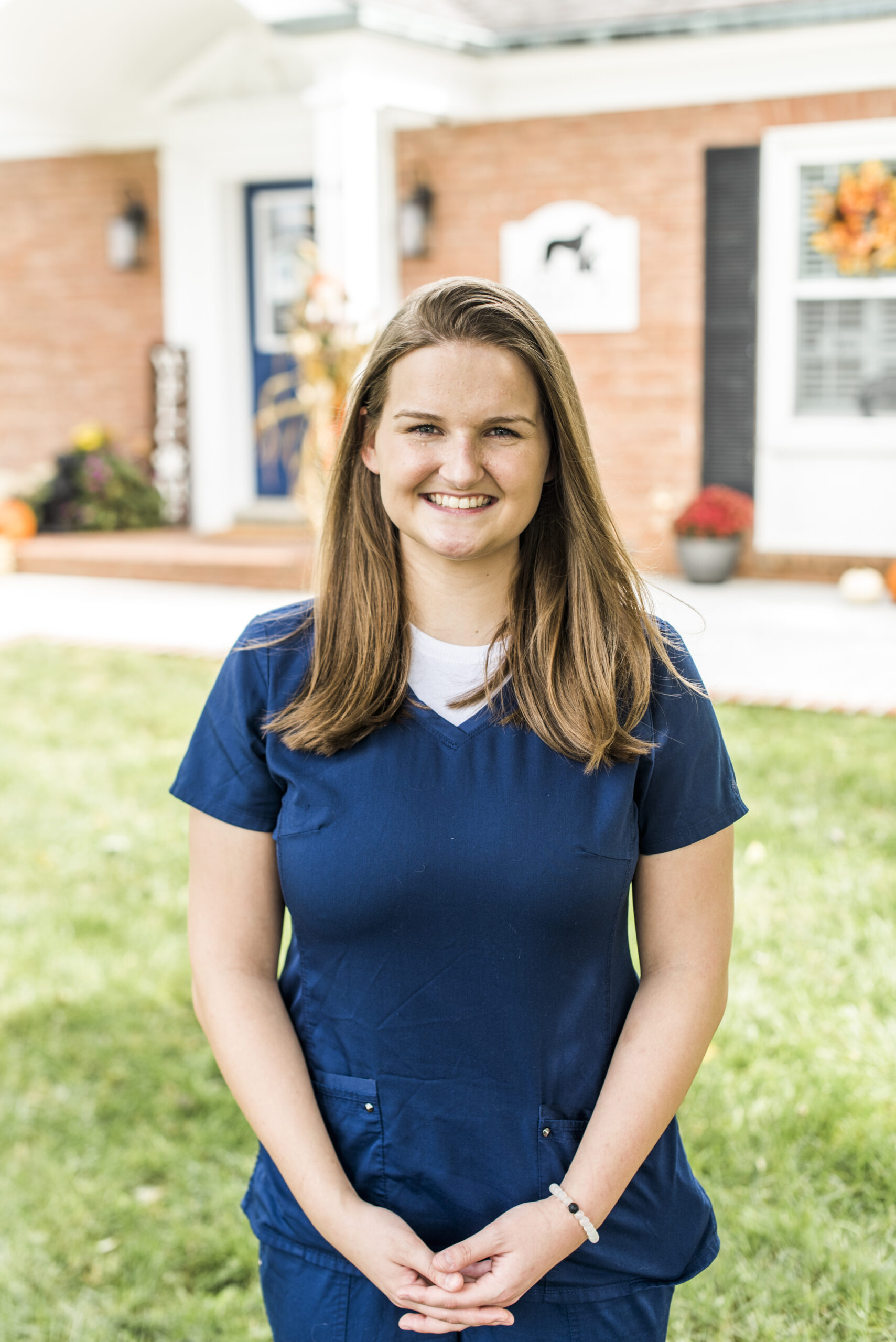 Danielle has been with Catoctin since August 2021. She has been in the field for over 6 years, and is actively attending the Penn Foster Veterinary Technician program to become a Licensed Veterinary Technician. She currently lives in Ashburn with her Fiancé as well as their cat Boris, and her two Guinea pigs Chicken and Nugget. In her free time she is busy planning for her wedding!

Raelyn joined the Catoctin Veterinary team September of 2022. She recently moved from Fredericksburg to Sterling, where she is Living with her two cats Fizz and NuNu. Raelyn graduated from Northern Virginia Community College becoming a Licensed Veterinary Technician. In her free time she enjoys exploring new wineries, breweries, and paddle boarding. 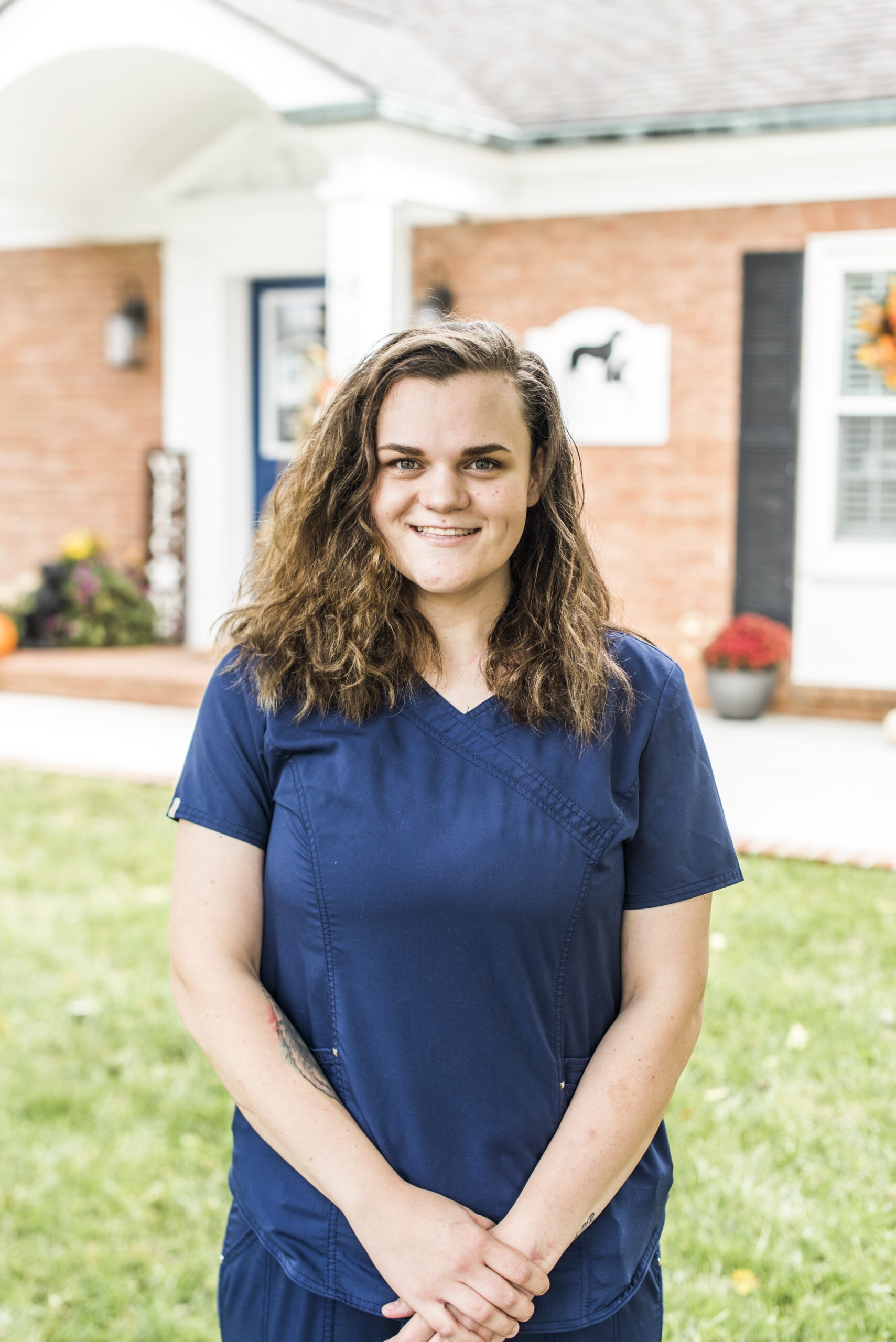 Marie has been living in Northern Virginia since 2011, when she moved here from Germany. She attended Loudoun Valley High School and graduated in 2018 and has been in the veterinary field since then working in an emergency clinic. She is currently going to school to become a Licensed Veterinary Technician. She joined the Catoctin family in August of 2021 and hit the ground running with her ER experience. She has one pet of her own, a 19-year-old cat, named Ela. In her free time, she enjoys being outdoors, camping, hiking, reading, and cooking.

Ally is originally from Connecticut! She moved to Northern Virginia in 2019 where she started her career in veterinary medicine while attending school. She has been at Catoctin Vet Clinic since April of 2022. Ally has a three-year-old gray tabby named Willow who she loves dearly. Ally enjoys spending her free time cooking, making homemade pasta (that is her specialty) as well as reading. Most of her free time is taken up by studying!  Ally is currently attending GMU for her Bioengineering degree. 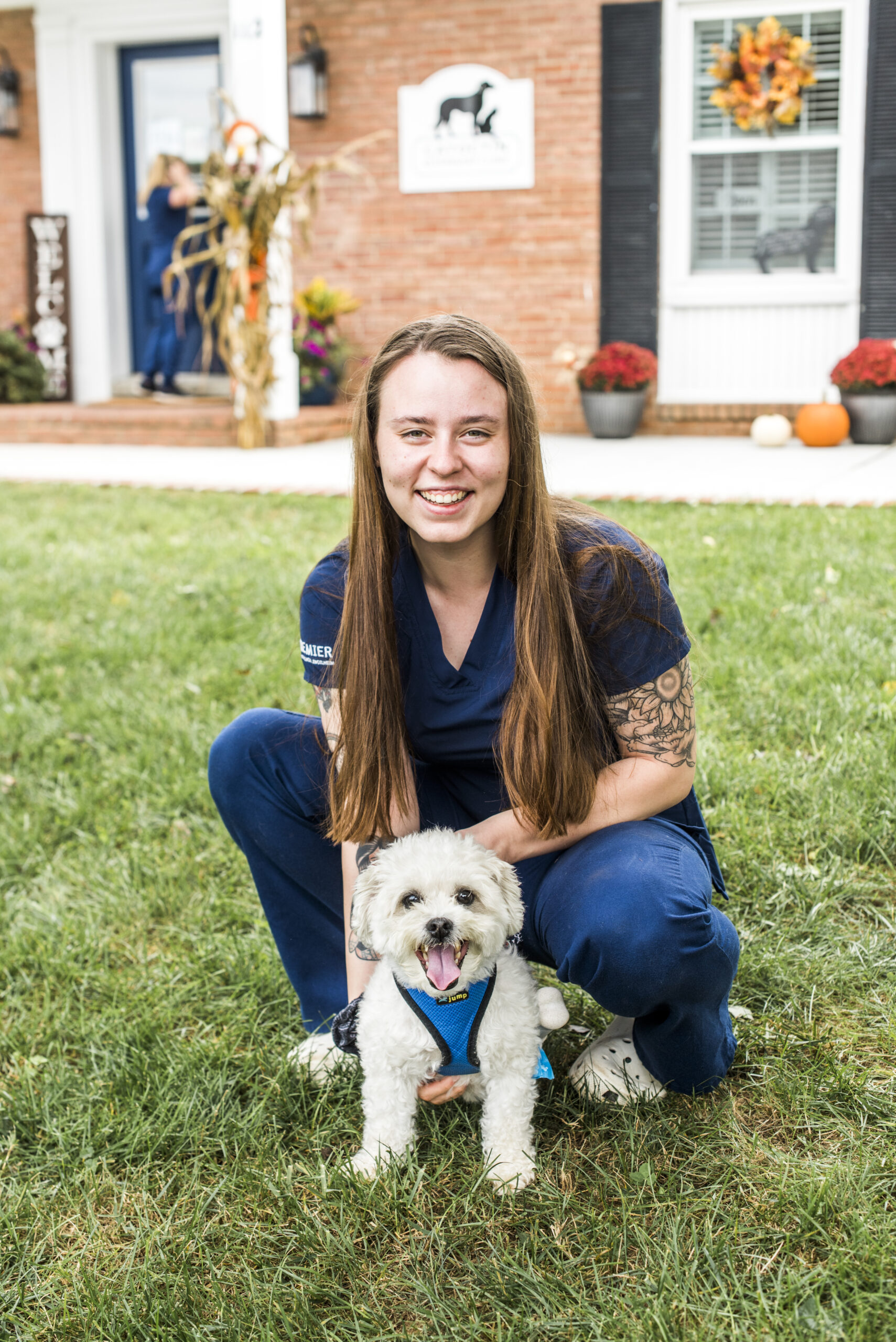 Star has been at Catoctin Veterinary Clinic since July of 2021. She came to us from another local veterinary clinic and had a wealth of knowledge in small animal general practice. She has been in the field for 6 years now. Star has been in Northern Virginia her whole life, attending Loudoun Valley High School and graduating in 2016, she is currently enrolled at Penn Foster to become a Licensed Veterinary Technician. She has one dog named Charlie who is the apple of her eye. In her free time she enjoys hiking, geocaching, spending time with her family! 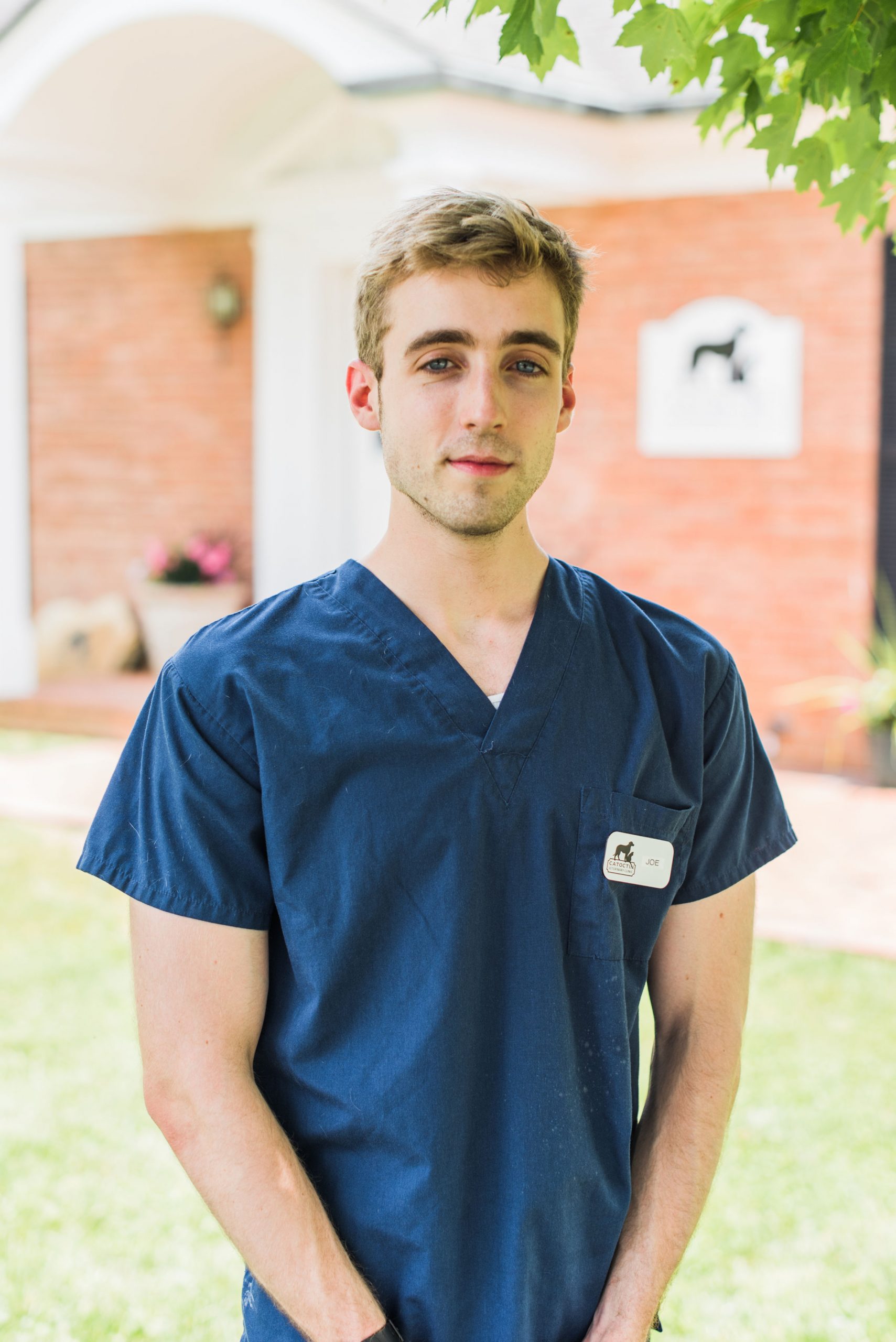 Joe started working at Catoctin Veterinary Clinic in 2017 during his senior year of High School. He now attends Virginia Tech and is studying Animal and Poultry Science with a minor in Chemistry. Joe is planning to become a Veterinarian. Joe is in a professional medical fraternity called Delta Epsilon Mu which focuses on professional development and life skills. His roommate in college is an adorable rescued mix named Penny. Penny loves the Virginia Tech campus and considers herself a die-hard Hokie fan. In his free time Joe likes to work out, play video games, and longboard.

Terry started at Catoctin Veterinary Clinic in 1985. She is the smiling face many of us know and love when entering the front door of the Clinic. Terry is well known for her wonderful attitude, love of cats, and handing out treats to every pet.

Terry has always had a passion for animals and has used her knowledge and skill to rescue a countless number of pets. When Terry is not working at Catoctin, she volunteers for the Loudoun County Humane Society and is very active in her church. Terry traps, fosters, and re-homes numerous cats every year for the Humane Society. Terry also has her own rescue and 13 cats she cares for with her husband, Mark, of 45 years. She also just added a new addition to the family; her name is Josie. Josie is a Border Collie who has quickly become the center of attention. Do you know the band named Josie and the Pussycats? Well that is how Josie got her name! Josie and the 13 pussycats to be exact!

Ashton start at Catoctin Veterinary Clinic in September of 2020. She is the bubbly smiling face that greets you and your pet for every visit. Ashton has great people skills and always comes to work with a positive attitude. Ashton has a love for huskies as she grew up with two of them as a child.

Ashton lives in West Virginia and loves to spend her weekends on the Shenandoah River, at breweries or wineries with friends, or rooting on her favorite hockey team, The Washington Capitals. Ashton originally lived in the sunny state of Florida and enjoys traveling back to the beach whenever she can!

Renee grew up in Western Maryland and have been living in Northern Virginia for the past 36 years. Renee started at Catoctin Veterinary Clinic in 2022 having a wealth of knowledge in the field as a veterinary receptionist. This is Renee’s 3rd career and definitely a perfect fit for the animal lover she is! She is the mom to 2 dogs and 2 cats which keep her very busy.

In her free time, Renee enjoys taking her dogs on walks, hanging out by the pool with friends and spending time with her family.

Rosni is a native Northern Virginian who joined Catoctin in August of 2022. She has two cats at home both named after well-known scientist Charles Darwin and Bill Nye. She has been in the Veterinary field for 6 years after working in an animal shelter for a few years and becoming fascinated with the medical side of the work she did. She is currently enrolled in school to become a licensed veterinary technician. In her spare time, she enjoys going hiking, camping, backpacking, and generally getting lost in the woods. When not outside she enjoys cooking, reading on her porch, and cuddling her cats.

Ashley became a veterinary client service representative in 2012. She joined our hospital in June of 2022 with her positive enthusiastic energy. She comes to us with years of experience in veterinary medicine, having most recently worked at a local emergency hospital. She loves spending her free time with her daughter going to the beach and doing photography. She currently has one American Pitbull terrier named Isis who loves attention, acting like a lap dog, and will never turn down a treat. Ashley has a newfound love for her recently adopted cat.